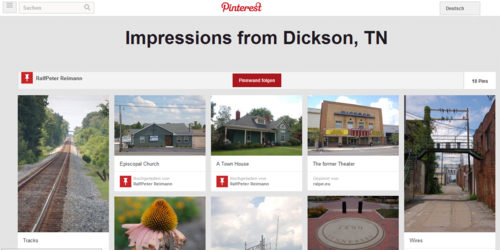 I must confess I was a little bit annoyed because I had to subscribe to five boards before I could do anything else on the Pinterest webpage. I like the mobile version on my smartphone a lot better, it is also more intuitive – at least for me.

I have created my first board now. You can see it on Pinterest: http://pinterest.com/ralpe/impressions-from-dickson-tn/  Nice? But I use Flickr for photo sharing (maybe I am too old fashioned) so I created this set: http://www.flickr.com/photos/ralpe/sets/72157634898152082

Each network has advantages and disadvantages, I like the intuitive use of Tumblr but I dislike that a photo post is limited to ten pictures. Flickr is good for geotagging, attaching licenses and setting privacy options, Facebook is very easy to use – and Pinterest: I was forced to enter a description for each photo.

I am a bit clueless: I was using Flickr before Facebook, recently I started my Tumblr blog, and now Pinterest? Do I duplicate (or better: quadruple) photo content in the future. Is iftt.com the solution for the future so I don’t have to do the quadruple upload manually?

Or have I simply not understood what Pinterest is all about and what to  use it for?

I am a bit clueless – who can help?

NB (Update  Aug. 2): Someone told me on Twitter that Pinterest’s main use is to share pictures already published on the web – and not to upload pictures to Pinterest.

Pinterest could be a handy tool if it were a bit more usable.

This site uses Akismet to reduce spam. Learn how your comment data is processed.